To Play with Her Brothers

Martha Little is a character in the Stuart Little franchise. She is Frederick and Eleanor Little's daughter and Stuart and George's youngest sister.

This article is a stub. You can help Stuart Little Wiki by expanding it.

After the events of Stuart Little, Fredrick and Eleanor have a girl named Martha, who becomes Stuart and George's youngest sister.

All throughout Stuart Little 2, Eleanor is trying to get Martha to say words, but she doesn't comply. Of course, Martha is a baby, so her personality is such as clingy to her mother, mess maker, and curious of her brothers George and Stuart.

At the end of the film, when Margalo leaves to fly south for the winter, Martha finally says, "Bye-bye, birdie!" and her family is happy for her.

In Stuart Little: The Animated Series, she is 3 years old and can speak some. 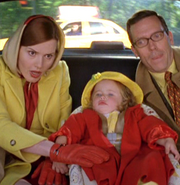 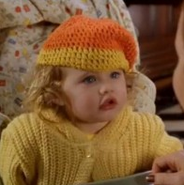 Add a photo to this gallery

Retrieved from "https://stuartlittle.fandom.com/wiki/Martha_Little?oldid=9470"
Community content is available under CC-BY-SA unless otherwise noted.