Start a Wiki
Stuart Little is the titular protagonist of the franchise of the same name. He is Mr. and Mrs. Little's son (biological in the novel, adoptive son in the film), George's little brother, Martha's big brother and Snowbell's friend and "master". In the first film, George Little saved him from the villainous Snowbell and he saved Snowbell from the villainous Smokey. In the second film, he saved Margalo from the Falcon. In the thrid film, he saved Reeko from the Beast.

In the novel, Stuart was born to the Littles, and the family adapted to having such a small son. He could walk as soon as he was born, and he could climb lamps by shinnying the cord at one week old. The family was then concerned about mouse references in literature, such as ripping out the Three Blind Mice page in their nursery rhymes book, and changing the word mouse to louse in The Night Before Christmas.

In the film, Stuart was born to a mouse couple and lived happily with them until one day, Stuart's biological parents died in an accident inside of a supermarket, where they crashed into a tower of mushroom's cream cans while they were buying victuals. Afterwards, Stuart had to live at the orphanage with the other children and Mrs. Keeper, the one who runs the place. As he grew up there for a long time, he started to know almost everything about the children and their personalities.

In the first film, Reginald and Camille Stout showed up at the Little house and announced they were Stuart's real parents. After being introduced to the Stouts by George, a heartbroken Stuart (who wanted to stay with the Littles) packed up his suitcases and was driven home by the Stouts. However, Mrs. Keeper told Mr. and Mrs. Little that the Stouts aren't really Stuart's parents, which made the Littles realize that Stuart's been kidnapped and they put up flyers of Stuart's picture all around the city. Eventually, Stuart was forced to run way from his fake parents' castle home, hid from Smokey's gang of cats, and drove back to the Littles.

This article is a stub. You can help Stuart Little Wiki by expanding it.
Stuart is a friendly, innocent, outgoing, well-mannered, courageous, fun-loving, energetic, playful little mouse who is not afraid to be himself and can try big things (which he's never too little for), despite his small size, which proves how courageous he is.

He also cares deeply for his friends and family and would go to great lengths to save the day even if he put his life on the line.

Stuart likes to ride his red car, plane, and skateboard. 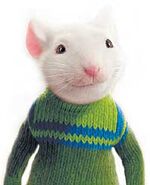 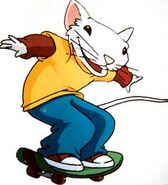 Stuart, as he appears in Stuart Little: The Animated Series

Stuart writing his name in pencil in Stuart Little: The Animated Series

Stuart and Margalo in the book 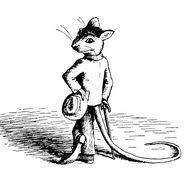 Add a photo to this gallery

Retrieved from "https://stuartlittle.fandom.com/wiki/Stuart_Little_(character)?oldid=9945"
Community content is available under CC-BY-SA unless otherwise noted.